The first is on a 20" X 20" X 2" wood panel. The painting wraps around the edges. I worked with acrylic and charcoal and added some paper. There is a bit of sgraffito, too. I might have taken this further, thinking that at this point it was an under-painting, but two artist friends whose opinions I cherish suggested that it was done. My paintings rarely happen that quickly and I was hesitant to trust that is was finished. So I stared at it for another couple of months, and when it didn't come back with wanting anything else I said okay, done. I do like it, but I don't have the same relationship with it that I do others that I've slaved over... like this second one... 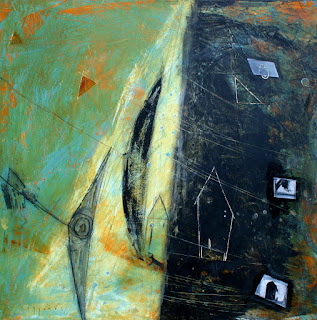 This one is 40" square, on paper, acrylic, black and white charcoal, oil and chalk pastel, some collage. I wish I had taken pictures of this one in progress because, boy, did it change. I was painting it for a show called "Take it Outside". At first I thought I was going to do big trees, as I've done before. Then just a line of smaller trees on a ridge. Then a bunch of smaller trees on a bunch of ridges - that stage looked terribly austere and sort of Tibetan...not that I've ever been to Tibet, but it had a mysterious Asian feeling to it. At any rate, it wasn't me. I realized that I was trying to make something sort of representational for this show and my whimsical side was fighting that.

So I gave in to the play and the painting started to be mine. 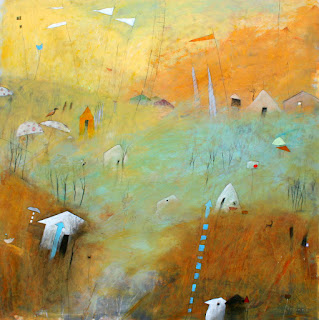 An interesting sidebar to this painting is that I knew I wanted it to be less Tibet and more my home, West Virginia. While I was painting it the southern part of this state had horrific flooding. People died, homes and businesses were washed away. I didn't put that in the painting intentionally, in fact I had the watery, obscured imagery in it before I heard about the flood. But now I can't see anything else.
Posted by Rebecca Grace Jones at 1:00 PM No comments:

A third pillar. At least seven feet high, maybe more. The wood base is 20" square. It is topped with branches trimmed from an Osage Orange. The branches are glued into holes drilled into the top, everything painted black.

I approached this one differently. With the first two I followed the spiral of the paper as it wrapped around the tube, treating it like a horizon, so that a continuous scene was created from the base to the top. On this one I didn't want to depend on that line so much. I didn't want to be quite so tight with the images, either. Nothing against the first two, I love their strength AND playfulness - that combination. But I wanted to see if I could free up the quality of the painting and make it more like my flat paintings and less of just filling in shapes with color. And I wanted to treat the whole surface as a unit and not a continuous spiral. Anyway, it was another way to try to solve the challenge of the tube as a painting and I like the way it came out. 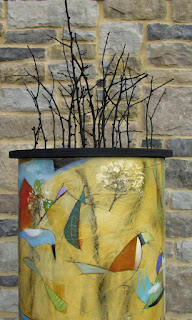 Again, this started as a cardboard cement (or concrete? - I don't know the difference) form 16" in diameter. I coated it with gesso and used a charcoal pencil to create gestural lines in the surface before the gesso dried. I painted the yellow ochre on as a base color and then, finding shapes and lines from the charcoal, added dark tones with burnt sienna, most of which was painted over with other colors.

I took all three pillars to Bridge Gallery (Shepherdstown, WV) today, where they will be part of the summer show during our Contemporary American Theater Festival, which fills our little town with wonderful people. I thought they looked pretty great in the gallery and I'm looking forward to seeing what the public thinks! This was such a fun project.
Posted by Rebecca Grace Jones at 1:37 PM No comments:

I've made the transitions from painting on paper to boxes and now pillars. These are acrylic and charcoal on cardboard cement forms. They are about 7 feet tall, including the 20" square base.

It was Bridge Gallery owner, Kathryn Burns who suggested to me that she saw my paintings on pillars and asked me to do some for her Summer Show. I had already made the move from flat paper to wood panels so it seemed like a great idea to me.

I found the 16" diameter forms at Home Depot. I first painted the surface with gesso which I scored with a spatula to create lines, shapes and texture. I then stained the piece with a yellow ochre base, added some gold and from there started picking out details from the gesso's surface to enhance with charcoal line first then acrylic paint. I started at the bottom and painted along the spiral line created by the paper wrapped around the tube, which I treated as a horizon, until I got to the top. I found creatures and structures and gave them color and credence.

The tops are wood discs in which I drilled holes and glued painted sticks. This second one also has a bird's nest I found at the barn.

Here's a detail of the top of the first one... 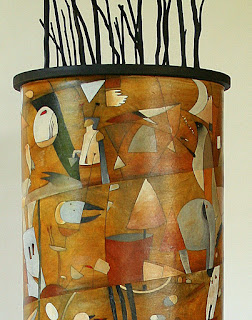 Posted by Rebecca Grace Jones at 1:30 PM No comments: 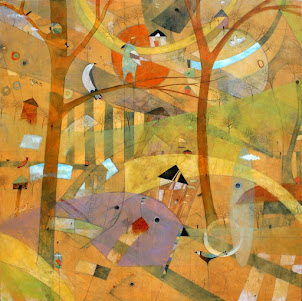